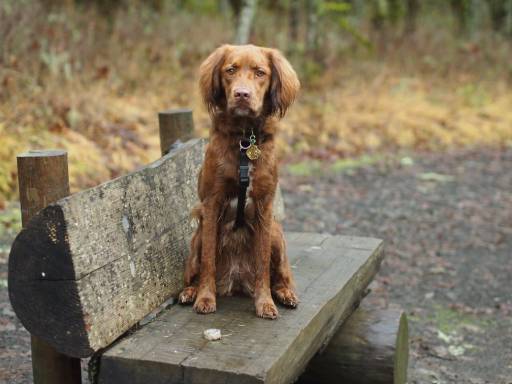 So, what is classical conditioning?

Accurate but jargon-filled answer: Classical conditioning is a form of learning in which an initially neutral stimulus is associated with an unrelated unconditioned stimulus to change the dog’s emotional response to that formerly neutral stimulus.

Think of classical conditioning as learning by association.

A Tale of Unintended Association

As some of you know, we moved from Kansas to Oregon about 7 months ago. During our first few months in Oregon, we rented a house in a rather rural area. Traffic was very light out there, and I typically walked River off leash. (River is my spaniel mix who was about 2 years old at the time.)

As fall progressed, the mornings became more foggy. River and I were out walking on one of these foggy-but-turning-sunny mornings when I saw a beautiful spider web on one of the fences. Tiny droplets of dew clung to the thin filaments and sparkled in the sun.

Of course, I had to take a photo, right? Isn’t that why we all have smart phones now? So, I knelt down near the fence, holding the phone/camera up between me and the spider web. River, being the curious creature that she is, came to investigate. She put her nose close to the fence. Then… ZAP!!! River yelped and jumped away.

The fence was electrified.

It wasn’t marked as such, but I should have recognized it. I felt horrible. Horrible.

I walked toward River, but she backed away. I shoved my phone into my treat pouch and sat down to see if she would come to me. She did. Physically, she seemed fine, but she was terrified. Although I had planned on walking further, I asked her if she was ready to go home, and she immediately set off in that direction.

Back at home, she perked up. We went about our usual routine. All seemed fine.

A couple of days later, my husband and I took River and Zoey (our then 7-year-old pit bull) for a hike in a wooded area north of town. We especially like this hike because the girls can run off leash, but they don’t tend to stray far from the path. Early on weekend mornings, we don’t tend to see too many other hikers. A quiet, relaxing hike.

On this particular day, I thought I’d get a picture of the girls as they romped down the path. As I took out my phone/camera and held it up in front of me, River looked up, tucked her tail between her legs, and ran behind Lou. We were stunned. She had never done anything like this before. Just moments before she was having a blast.

After a brief moment of being hurt that River was scared of me, I put away the phone without taking the picture. River relaxed. That was it. It wasn’t me. Well, it wasn’t just me. It was me with the phone.

Dogs have no idea, unless they’ve found out the hard way, that fences can be electrified. All she knew was that I was squatting with the phone when she approached the phone and received a terrible shock. That was the association she made that day: phones cause painful shocks.

How was this particular association made so quickly? Probably because the shock (unconditioned stimulus) was so very painful.

Why didn’t she make an association between the fence itself and the shock? Most likely because she was noticing the phone when the shock occurred.

Is that the association she is supposed to make when shocked by an electric fence? That particular fence surrounds a pasture in which sheep graze and is used to keep predators away from the sheep. Any predator touching that fence is supposed to learn not to proceed toward the sheep. The intended association? Getting too close to sheep or trying to cross this barrier causes painful shock.

Well, I can tell you that River made a very different association.

You’re Not Always In Control

So, why do I tell you this? What is my take-away message? Dogs are very observant. They are making all sorts of associations all the time, whether we plan for them or not. That’s not necessarily a bad thing, but it’s something we need to be conscious of.

For example, when you put on your shoes after dinner, your dog knows he’s going for a walk outside. Yay! Does your dog go into hiding at the sound of water running in the bath tub? Think of all of your daily routines. Does your dog just seem to know what’s going to happen next? Yup, that’s classical conditioning.

We don’t always know the origin of the association. Why does that dog bark at men in hats but will stop as soon as the hat is off? My dog Sprocket ran away from packages, specifically cardboard boxes, delivered to our house. We never knew why. Maybe your dog reluctant to walk by a particular house. It is very likely that these dogs formed negative associations with these people, places, or objects because of something that happened, possibly the first time the dogs were exposed to them.

Can We Undo the Damage?

Thankfully, you do not need to know what caused the association, as I did with River and my phone, to fix the problem. Using many yummy treats and lots of patience, I used desensitization and counter-conditioning to help River associate my phone with good things rather than bad, at least under some circumstances. However, even 7 months later, I can only take an outdoor photo of her with my phone at a distance of about 15 feet. And many treats are involved.

It can take a long time to change a negative association. Frankly, we may never get to the point that River is excited to see the phone. I’ll be happy if River doesn’t react at all when I pull it out on a hike. And sometimes that’s the best we can hope for.

Remember my dog Sprocket who was afraid of cardboard boxes delivered to our house? We used desensitization and counter-conditioning for that too. After a half dozen or so boxes, Sprocket became our “package inspector.” He came running to check out every package we received!

Sprocket was fearful of many things. Initially, I learned about dog behavior as a way to help him. What started as necessity has grown into a passion. He’s the reason I became a dog trainer. If you have a fearful dog, contact me! I want to help.

Join our mailing list for notifications of new blog posts and other information from All The Dogs.

You have Successfully Subscribed!