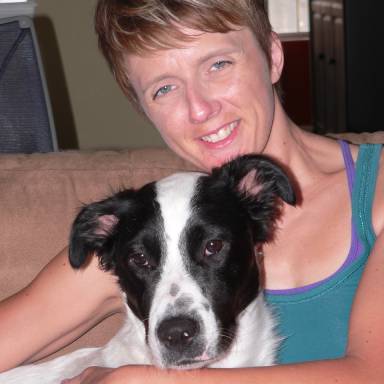 We are just days away from the scariest day of the year for some dogs: Independence Day. In some parts of the country, people are already setting off fireworks. In some places, the crackle, boom, bang of fireworks will continue for days or even a week. This is hell for a noise-phobic dog. I know because I used to have one.

Sprocket was an anxious boy in many ways. He lived his entire life in Kansas about 20 miles from an army post. Our house was across the street from baseball fields and down the road from a growing housing development. He regularly heard thunder from storms, artillery drills, nail guns from construction, aluminum bats hitting baseballs, and fireworks. He hated them all. He wouldn’t go outside if he could hear any of them. He would immediately turn to go home if we were out for a walk when one of these noises would start. During fireworks and thunderstorms, he often hid in our downstairs bathroom, the only room in the house without windows.

What would you do if Sprocket was your dog? If you’re reading this, it’s very possible that you have your own Sprocket. Maybe you’ve been told that you should not coddle your dog when he’s fearful because you’ll only increase his fearfulness. Have you been told not to pet your dog or give him treats when he’s afraid because it will just reinforce his fear? Well, that’s crap.

The Truth about Reinforcing Fear

Let’s recap a few concepts that we’ve touched on in previous blog posts. Reinforcement refers to the process of increasing the chance that your dog repeats a behavior. Read that again. Reinforcement is about increasing the chance that your dog acts in a particular way. A behavior is an action. It is not an emotion. But fear is an emotion. That’s where the anti-coddling idea breaks down. Reinforcing fear through treats or attention is just not possible. (I have discussed reinforcement a few times with posts about consent, intermittent reinforcement, and replacement behavior.)

Sprocket was never destructive during fireworks, but he was clearly scared. When the fireworks would get particularly bad, he would shake uncontrollably. (It still brings tears to my eyes when I think about it.) Most of the time, though, he simply retreated to the quietest room in the house and curled up on the bath mat. Your dog may also display more subtle signs of fear and anxiety, such as lip-licking, attempting to escape, pacing, and many others. We still want to change those emotional responses as well.

What do we do to help our fearful dogs? Well, it turns out that we should be doing exactly the opposite of what the anti-coddling crowd suggests. Give your dog treats if he’ll take them. Pet him. Play tug or some other game. These will work best if you can muffle the noise in some way: turn on the television, play some music, turn on a white noise machine. But then do the things that make your dog happy. Repeatedly. Every time the firework booms present the good stuff.

At first, you may just be providing a distraction for your dog. But any distraction from that fear is a good thing. However, by repeating this process of presenting the good thing every single time the scary firework booms, over time, your dog will anticipate the good thing when he hears fireworks booming. That is, the fireworks predict good things so there is less reason to be fearful.

Do some experimenting. Find a way to muffle the noise. Learn what your dog will respond to during fireworks: toys, treats, cuddling. It’s not magic. It won’t be immediate. Consistent efforts over time pay off. And if you need to, ask for help!

You Can Make Things Worse

It is important to know that you can make fear worse. If your dog is fearful and you are also fearful, panicky, anxious, your dog will pick up on that and feed off it. Also, if your dog is fearful and you make a sudden loud noise, or startle him in some other way, you will likely increase his fear. To be clear, these things are not reinforcing fear either. They don’t make fear more likely, but they will probably increase the fearful feeling. So remain calm and relaxed during fireworks. And try not to drop any pots and pans.

Join our mailing list for notifications of new blog posts and other information from All The Dogs.

You have Successfully Subscribed!